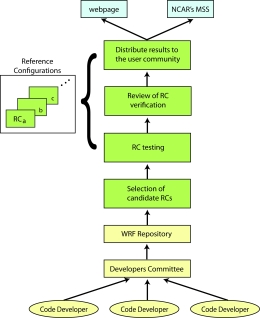 In order to serve both the operational and research communities, the DTC has developed the concept of Reference Configurations (RCs).  By conducting carefully controlled, rigorous testing, including the generation of verification statistics, RCs provide the operational community guidance for selecting configurations with potential value for operational implementation.  RCs provide the research community with baselines against which the impacts of new techniques can be evaluated.  Statistical results for a RC also aid researchers in selecting a configuration to use for their particular application.

A RC is defined as a particular collection of configuration files that are set at compile-time and run-time.  Each RC is uniquely defined and detailed in a design document.  RCs are extensively tested, documented, and the baseline data and statistical verification results are made available to the community.

DTC RC testing is generally retrospective in nature and encompasses a large number of cases.  The cases are selected to encapsulate a broad range of weather regimes.  The exact periods and domains chosen vary based on the type of phenomenon the configuration is designed to forecast.  Once a RC has been run for the specified set of cases, extensive verification statistics are computed and the results are distributed to the user community via the DTC RC webpage.  In addition, all input and output datasets are archived for at least one year.

DTC RC testing is generally based on official releases of the WRF code with the inclusion of any bug fixes that have been posted prior to retrospective testing.

More information on the process of designating DTC RCs can be found in the RC Implementation Plan (pdf).

For a user defined configuration to become a CCRC, the contributing user will be required to fully disclose the details of the code and configuration.  A sufficient quantity of cases that represent a broad range of weather regimes relevant to that particular application must be available from a consistent (unchanged) version and configuration of the code in order to qualify.  The contributing user must also provide at least a minimal set of verification measures for the cases.  Information on CCRCs is posted on the DTC CCRC webpage.  In order to keep the results most relevant to the user community, results from old versions of the code will eventually be retired or may be updated by the contributor with results from a more current version of WRF.  More information on requirements for submitting CCRCs can be found in the RC Implementation Plan (pdf).

Contribution: Results of nudging in ARW and NMM